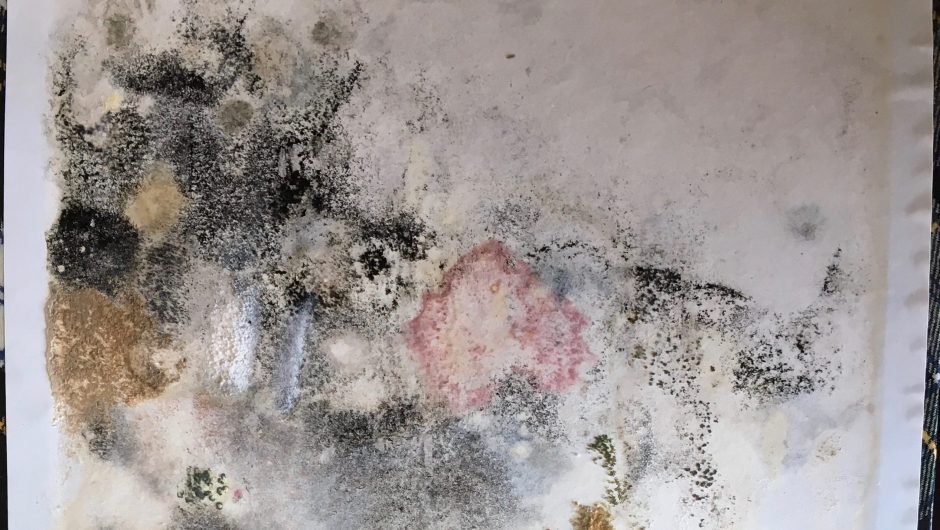 The pages are so swollen we have to pry the books from their shelves with a long screwdriver, levering against the after-effects of the flood. A few thin volumes at the outer edges seem almost dry. With his sleeve, Wayne wipes the mantle and lays them down flat. “I think these can be saved!” he says, his voice sharp with the kind of hope that knifes up from despair.

I haven’t written this blog for three months. This is where I start again. 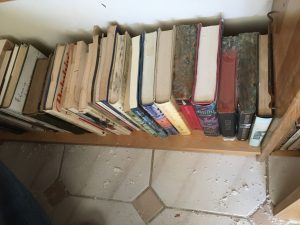 Not everything was destroyed by the tap that sprung off its copper mooring, opening a fountain that dripped through the house for less than twenty-three hours, collapsing ceilings, swelling walls with paint balloons, buckling floors. It is four days since we got the call in Mexico, our first day back in our ruined house. Furniture sags under splats of drywall; the more fortunate pieces huddle in a dry corner, like sheep in a storm. On the lower shelf of the coffee table, a single plaster paw print gives evidence of where Odysseus, our cat, sheltered in the downpour. The air is thick with damp and the whirring of a dozen industrial dehumidifiers.

We go first to the bookshelves in our library of Canadian books. Two walls of shelves escaped the steady rain and dribbling waterfalls that coursed through the seven-level house. One wall stands at the centre of the deluge—hundreds of books collected over a lifetime, dripping now like things fished out of the toilet. “Charles Sangster,” I say, pinpointing the starting line of our loss, and then where it ends: “Jan Zwicky.” Between those two, the entire life’s work of Duncan Campbell Scott, Carol Shields, Elizabeth Spencer, Yves Theriault, Catharine Parr Traill, Bronwen Wallace, Sheila Watson, Ethel Wilson, so many more. Most of the books are first editions. Many are signed. Some are so rare, we can never replace them, not at any price. 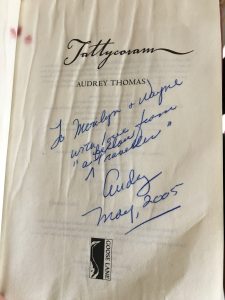 Many of the living authors are friends. Diane Schoemperlen. Audrey Thomas. Miriam Toews. Jane Urquhart. Michael Winter. Tim Wynne-Jones. Sean Virgo. The inscriptions are heartbreaking. I photograph them all. “We can contact these writers,” we console each other. “We’ll buy their books again.”

Wayne lifts each one off its shelf. They pry apart with a strange sucking sound. Delicately, he lifts the pages until he gets to the publishing data. I note the title, author, publication date, and edition on the Schedule of Loss the insurance company has given us. Don’t bother writing them all down, the agent said, just give us a total. But I do write them down. We insist on it. This isn’t a schedule of loss so much as a record of the passing of dear friends. We owe these books that much, at least.

One by one, we lay the unsalvageable in soggy piles in the middle of the library floor. 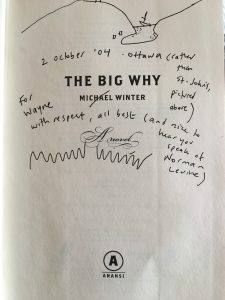 Then, amidst the wreckage, something strange happens.

“I remember buying this book,” Wayne says, “at The Word in Montreal. Morgan was a baby. The bookstore opened the day she was born.”

Holding Helen Weinzweig’s Basic Black with Pearls, I think first of the story of that housewife and her affair with the mysterious man from the Agency, their rendezvous in exotic places arranged through coded notes stuck in issues of National Geographic. He recognizes her by her dress—basic black with pearls—a costume she discards as she returns to herself. The book is thick with memories. I remember Diane Schoemperlen, early in our friendship, urging me to read it. The book was a writing workshop: the sharply pruned prose, the strange dialogue that skewed deep into the characters, the perfect pacing. Flipping through the damp pages, an old feeling comes welling back to me: there is no right age to be a writer. I was under 40 when I read this novel, already feeling too old to be working on my first literary book, but Helen Weinzweig was 58 when she made her brilliant debut, and that gave me hope. 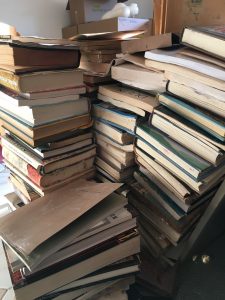 We pull wonky, plaster-splattered chairs up to the shelf. Time slows. The stink of mould, pages that dissolve under our touch, it all disappears as we lose ourselves in the particular world of each book—not just the story, but the finding, the reading, the sharing of it. We return each morning to our seats in front of the destroyed shelves of books, eager to relive these fragments of our past that have slipped from active memory, recalled now as the foundation stones of our writing and reading lives.

The mould that I could hardly bear to look at in the beginning becomes beautiful. Each day the fuzz grows thicker, the crust more pungent. Blues and pinks and bright orange, a yellow the colour of daisy pollen.

With a start, I recognize this mould, although I have never seen it before. The last section of my novel Refuge is entirely taken up with mould. The elderly Cass and the young Burmese refugee Nang share an obsession with trapping life in an image, and when Nang discovers Cass’s box of old negatives in a shed, the celluloid eaten by moulds, she embarks on a project to breed colonies on her own photographs, using the fungal filaments of microscopic creatures to shape life into art. For months, I delighted in the complexity, the diversity, the persistence of mould. How can I despise it now?

The mountain of mould-colonized books at our backs grows as the shelves empty. The few thin volumes that Wayne set on the mantle have splayed their pages, turning pink now from the spores that cloud the air. We add these books to the heap, too. 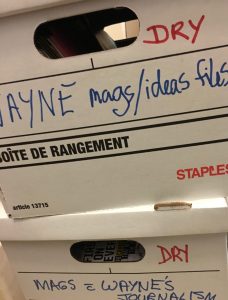 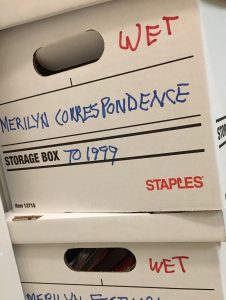 We must press on. Furniture needs pitching. Paintings need assessing. Boxes of dripping archives need sorting. The photograph albums, with their own bloom of mould, await. The sodden mess of our life must be gone through, triaged, reshaped into a reduced mosaic of things.

“They’re just things,” our friends say, trying to boost our spirits. But it’s not the thingness of the objects we mourn, it is the stories they sparked in us.

The books came first, and as always, they prove our best guide. Stories are indestructible. Perhaps not with joy, but at least with less despair, we step deeper into our disintegrating material world, certain we can salvage what neither water nor mould can obliterate.

What books have you lost that you still carry with you?

Posted by
Merilyn Simonds
Merilyn Simonds is the internationally published author of 18 books, including The Holding, a New York Times Book Review Editors' Choice, and the Canadian classic nonfiction novel, The Convict Lover, a finalist for the Governor General's Award. Her most recent nonfiction is Gutenberg’s Fingerprint: Paper, Pixels, and the Lasting Impression of Books. Her latest novel Refuge was published in 2018. Woman, Watching: Louise de Kiriliine Lawrence and the Songbirds of Pimisi Bay will be published by ECW Press in April 2022.
Merilyn Simonds has posted 51 articles
Previous articleNota Bene
Next article Fall LitBits 2018