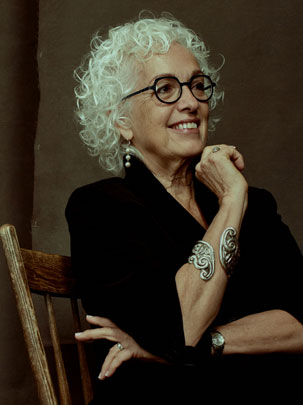 Merilyn Simonds is author of 20 books, most recently Woman, Watching: Louise de Kiriline Lawrence and the Songbirds of Pimisi Bay, released in May, 2022.

Born in Winnipeg, Canada, Merilyn grew up in Brazil, where she acquired a taste for the fabulous. She published her first book in 1979 at the age of 29, and since then her work has been anthologized and published internationally in eight countries. She writes in a wide variety of genres—personal essay, memoir, travel, literary fiction (such as the novel The Holding, a New York Times Book Review Editors’ Choice) and creative nonfiction, including The Convict Lover. In 2017, Project Bookmark Canada installed a plaque on the site of the former Kingston Penitentiary rock quarry to honour the place of The Convict Lover in Canada’s literary landscape.

As Merilyn’s editor, who was also editor to Margaret Atwood and Michael Ondaatje, once said to her, “I can always count on you to come up with something totally unexpected. You never write the same book twice”—a comment that Merilyn chooses to take as a compliment.

Merilyn Simonds is the author of twenty books, including the creative nonfiction classic, The Convict Lover, a finalist for the Governor General’s Award and inspiration for Judith Thompson’s play, Hot House. After 22 years in print, The Convict Lover was released by ECW Press in a new 2018 edition as part of their BackLit series of Canadian Classics. In 2017, Project Bookmark Canada erected a plaque on the former site of the Kingston Penitentiary rock quarry to honour the place of The Convict Lover in Canada’s literary landscape.

Simonds’ other books include a collection of short fiction, The Lion in the Room Next Door; a bestselling novel, The Holding; a travel memoir, Breakfast at the Exit Café co-written with her husband Wayne Grady; and a book of personal essays, A New Leaf. Her work is published and anthologized internationally.

In 2012, she released a flash-fiction collection, The Paradise Project, in both a hand-printed letterpress edition and as a digital book. The experience of helping to produce both versions inspired Gutenberg’s Fingerprint: Paper, Pixels & the Lasting Impression of Books (2017), an exploration of the past, present and future of the objects we call “book,” trolling the history, the myths and inventions, and her own 40 years as a writer to discover the truth about the digital shift and how we read today.

Reviewers have called her work, “Beautifully wrought, emotionally complex.” “Stories so solid they seem sculpted, yet so delicate they remain full of mystery.” “The observation of the details of life are Chekhovian in their accuracy.” Susan Halpern, writing in the New York Times, where The Holding was selected an Editor’s Choice, says, “Simonds is a careful, evocative writer, able to tease out colors from an overcast sky, to find depth in shadows.”

In September 2018, ECW Press released Simonds’ novel, Refuge, set in Mexico, New York City, Montreal, and eastern Ontario. Elizabeth Hay, author of the Giller-winning novel Late Nights on Air, called Refuge “A silk scarf of a novel, which catches on a far-flung places and deep heartaches and gathers them into an old woman’s gnarled and feisty memory. Merilyn Simonds shows how mysterious we remain to ourselves and to each other after even a century of living.” In 2020, Refuge was published in Germany as Zuflucht

Simonds’ most recent work is a hybrid biography/memoir Woman, Watching: Louise de Kiriline Lawrence and the Songbirds of Pimisi Bay, published in May 2022.

I wrote stories for my baby sister, started a newspaper at my high school so I could publish the short fictions I was writing then. My guidance counsellor drafted me into journalism (a common fate at the time for those who showed in interest in writing). I slid into magazines, and from there, into practical nonfiction, publishing nine books before I moved to Kingston in 1987 and discovered the cache of letters in my attic that became The Convict Lover, my first literary book.

For me, writing was never separate from life. As Chair of The Writers’ Union of Canada, I lobbied for stronger copyright laws and against the efforts of corporate interests to remove the right of a nation to its own cultural sovereignty. I continue to work for equal access of writers of every gender, genre, and cultural background to publication, to reviews, and especially, to equal financial compensation.

I am part of a generation of readers and writers that have had to adapt to seismic changes in the literary landscape. In my 40 years as a writer, I have published books in the traditional way that Gutenberg would have recognized and I have self-published my own digital ebooks and e-stories. As sources of book information dwindled and festivals became more important as a meeting place for readers and writers, I gathered together a cohort of remarkable colleagues to found Kingston WritersFest, where some 10,000 readers meet writers every year.

As a writer, I refrain from categorization, exploring whatever form a story seems to require: short and long fiction, creative nonfiction, historical nonfiction, children’s literature, drama, fable, hybrid forms that have no names. I cheer each time I discover some entirely new way of writing, of getting stories into the hands of readers.

Because, in the end, what matters are stories—stories that we’ve been telling each other, in one form or another, for as long as humans have been on the planet.

Merilyn Simonds was born in Winnipeg, Manitoba, spent her childhood in Brazil, and came of age in a small town in southwestern Ontario. Her shifting attachment to place—especially those years in South America—is the stone in her literary shoe that shapes the themes in all her work.

Merilyn began as a freelance journalist, publishing nine nonfiction books and scores of magazine articles on subjects ranging from the environment to soap–making, from art and architecture to war.

With the release of The Convict Lover in 1996, she became nationally known as a literary writer, exploring the zone where fact and fiction meet. Now considered a classic in Canadian creative nonfiction, The Convict Lover was nominated for the Governor General’s Literary Award for Nonfiction and was chosen as one of the top ten nonfiction books of 1996 by the Globe and Mail, Quill & Quire Magazine, Elm Street Magazine and Maclean’s. It was translated into Chinese, Japanese, and German, and in 1997, was adapted for the stage by the Kingston Summer Theatre Festival, premiering at Theatre Passe Muraille in Toronto in the fall of 1998. In 2016, it was inspiration for the Judith Thompson play Hot House, commissioned by Theatre Kingston. In 2017, Project Bookmark Canada erected a plaque in Kingston, Ontario, to honour the place of The Convict Lover in Canada’s literary landscape.

The Lion in the Room Next Door, Simonds’ collection of linked, autobiographical stories, was published in 1999 to critical acclaim and like The Convict Lover, became a national bestseller. The following year, it was released by Bloomsbury in England, G.P. Putnam’s Sons in the United States and btb Verlag in Germany.

The Holding, her first novel, was published in 2004 and spent five months on the Canadian Booksellers’ Association bestseller list. Published in the United States the following year, it was selected a New York Times Book Review “Editor's Choice.” The novel appeared in Germany in 2007.

In 2005, her short story “Miss You Already” was published in Germany, the Netherlands, and Canada, where it was nominated for a National Magazine Award. Her short fiction has been anthologized internationally and was included in a special 2009 issue of Journal of the Americas on Canadian literature and art.

In 2010, she published Breakfast at the Exit Café: Travels in America, a travel memoir co-written with her husband, Wayne Grady. Selected a Globe 100 best book of 2010, Joseph Boyden called it “a brilliant road trip I never wanted to end.”

In the spring of 2009, Simonds launched a weekly blog—frugalistagardener.com—which was published in March 2011 as A New Leaf: Growing with my Garden. In 2012, she published The Paradise Project, a collection of flash fiction hand-typeset, hand-printed on a 19th century printing press, with end papers made from plant material gathered from her gardens. At the same time, she worked with her son Erik Mohr to produce The Paradise Project, two out-of-print books and five original stories, as ebooks.

The experience of working in both letterpress and digital media provoked an investigation of books and reading that became Gutenberg’s Fingerprint: Paper, Pixels & the Lasting Impression of Books, published 2017.

Simonds has edited two anthologies: A Literary Companion to Gardens (2008) and A Literary Companion to the Night (2009). She has been writer–in–residence at Green College, University of British Columbia, and at the Whistler Vicious Circle. For ten years, she wrote a monthly column, AboutBooks, in the Kingston Whig Standard. She has taught creative writing at Kwantlen University, was adjunct professor in the Optional Residency MFA in Creative Writing program at UBC, a visiting scholar at The University of Saskatchewan in Saskatoon, and now privately mentors writers working in both fiction and creative nonfiction. In 2009, with a team of dedicated volunteers, she reimagined Kingston WritersFest and as the Founding Artistic Director, shaped a world-class festival that draws an audience of 10,000. The Festival has set up the Merilyn Simonds Protégé Project in honour of her work mentoring young writers. She served as Chair of The Writers Union of Canada in 2012-2013 and spent several years on the Board of Directors of McGill-Queen’s Press.

In September 2015, Simonds adapted the Alice Munro short story “Dear Life” into a foundational text and script for a symphony by Zosha di Castri, commissioned by Alexander Shelley, the incoming musical director of the Canadian National Arts Centre Orchestra, with voice recording by Shakespearean actress Martha Henry, soprano voice by Erin Wall, photography by Larry Towell, media production by Turbine, and creative direction by Donna Feore of the Stratford Festival. In March, 2016, Simonds’ essay “Where do you think you are?” was published in The Cambridge Companion to Alice Munro, published by Cambridge University Press.

In 2018, an anniversary edition of The Convict Lover was issued to commemorate 30 years since the finding of the letters at the heart of this classic tale.

Her novel, Refuge, also released in 2018, spans most of the twentieth century and circles from eastern Ontario to Mexico, New York City, and back to Canada. In the words of Governor General-winning author Steven Heighton, Refuge is a novel that “patiently accrues richness and layered resonance in the manner of a long life—in fact, like the almost century-long life of its stubborn, vital heroine. It explores in personal and intimate terms the most important issues of our time: the nature of borders and belonging and the plight of the refugee.”

Simonds’ biography/memoir titled Woman, Watching: Louise de Kiriline Lawrence and the Songbirds of Pimisi Bay will be published in May, 2022. She is currently working on a novel set during the Zapatista war in Mexico and a book of personal essays called Still Life with Beth.