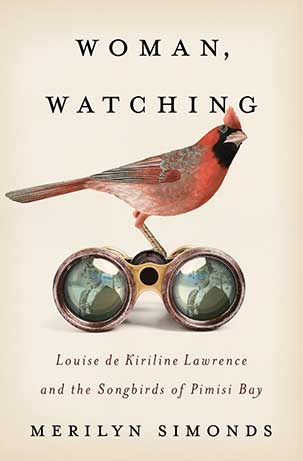 Published by: ECW Press
Publish Date: May 24, 2022
Pre-order now from your local independent bookseller or from:

The March sun wasn’t yet warm enough to slump the snow when the evening grosbeaks descended on Louise’s feeding station. She was watching out her kitchen window, as she always did, a cup of strong coffee in hand, her reward after a vigorous bird walk at dawn, a habit of forty years that she had not yet given up, even on the cusp of ninety. The flock of black and yellow birds mobbing her tray of sunflower seeds was the largest she’d seen in years. For decades, she’d been collecting data on evening grosbeaks for her ornithologist friend Doris—how many came to her feeder, male or female, when and where they nested, how long it took the eggs took to hatch and the young to fledge. She made a mental note to check her records to see if the numbers this spring were truly record-breaking.

Suddenly, amidst the black and yellow throng, a flash of pure gold. Louise lifted her binoculars. Obviously a grosbeak—those thick seed-cracking bills—but solidly yellow, like an oversize canary.

The other birds settled back to their feeding, edging the uncanny bird off the tray whenever it tried to snatch a seed, until finally, the gilded bird rose like wisp of pure sunshine and disappeared among the trees.

My feeder was half an hour southwest of Louise’s, flying as a hungry bird might along the canopy-highway of boreal forest between her log house nestled in the pines on the edge of Pimisi Bay and my R2000 prefab, tucked into hundreds of acres of forest just south of Callander in Ontario’s Near North.

Evening grosbeaks shifted across my wooden feeding tray as if by some prearranged schedule, clearly not women and children first as it was the males that were snuffling up the sunflower seeds, cracking them open and scooping out the meat with their thick, curling tongues, blackening the snow with shells.

The motorcycle gang, I called these birds, gold slashes above the eyes like cool yellow sunglasses, wings glossy as black leather jackets with a startling white blaze. My sons were at school; my husband at work. I stood alone at the sliding-glass doors, counting. A hundred birds, at least.

Silvery females were jostling for seed now. Suddenly they fluttered up, a small explosion, leaving a strange, golden bird alone on the tray.

“The Golden Bird” is one of the tales collected by the Grimm brothers. In the fable, when a king discovers golden apples missing from his orchard, he asks his three sons to watch for the thief. Only the youngest son stays awake to witness the culprit—a golden bird. The three sons are sent to catch the bird and bring it to the king. The two older boys ignore the advice of a fox and are distracted from their quest, but the youngest follows the animal’s wise counsel, endures the trials that beset him, and wins the fastest horse in the kingdom and the most beautiful woman, releasing her brother from the spell that had turned him into the fox.

The story is found in other collections, too, although the bird often changes species—a golden blackbird in one, and in the French-Canadian version collected by Marius Barbeau, a golden phoenix. In that story, the fox is a hare, an equally mythical helper who counsels diligence over comfort and dedication to a quest.

Nowhere is the golden bird a grosbeak, except in Louise’s yard and mine.

If Louise had been younger, she might have set her drop traps to catch the golden bird, banding it and releasing it in the hope that someone, somewhere, might report its fate. If she could have figured out a way to feed it apart from the bullying flock, the pure yellow grosbeak might have built a nest in her patch of woods and she would have watched the eggs hatch, the young fledge and migrate south, to the Appalachians perhaps, returning to mate again, a unique gilded strain that scientists might have named for where she lived. Coccothraustes vespertinus Pimisiana. Or for her—Coccothraustes vespertinus deKirilina.

Very few women have a bird named for them. There is Mrs. Bailey’s chickadee, Parus gambeli baileyae, dedicated to the nineteenth century ornithologist Florence Merriam Bailey. And the Nice song sparrow, Melospiza melodia niceae, a Mexican race named for Margaret Morse Nice, a woman who devoted herself to writing the life history of this sweetly singing bird.

Like both these women, Louise was a watcher. Florence Bailey in the American Southwest. Margaret Morse Nice in Ohio. Louise de Kiriline Lawrence in northern Ontario, where for fifty years she kept meticulous daily records of the birds she saw, the nests she watched, and the individuals she banded at what was then Ontario’s most northerly banding station.

Louise was an amateur. In the late nineteenth-century world she was born into, an amateur observed birds not for personal gain, but for the altruistic purpose of increasing human knowledge about the natural world. Until the middle of the twentieth century, it was mainly amateurs who pushed science forward, especially the natural sciences, collecting data and specimens for museums and the people who ran them. Today, despite the professionalization of scientific study, amateurs continue to make significant contributions, especially in the realm of birds. Who else would sit for days on end forests, swamps, and meadows, observing, wondering, and recording every twitch and flight of bird behaviour?

As a self-trained amateur ornithologist, Louise de Kiriline Lawrence set a record for counting bird song that has never been broken. She wrote life histories of wilderness birds whose lives were a mystery at the time. She parsed the meaning of bird behaviour that scientists are only now proving to be true. She wrote six books about birds, including a comparative life history of four species of woodpeckers that explored the age-and-stage patterns—birth, growth, reproduction, death—and the interactions with their environment that make up the life of every living creature. She was interested not only in songbirds—passerines—but also in the tree-dwelling near-passerines such as woodpeckers and merlins that shared her forest. She published almost a hundred articles in scientific journals and popular magazines, pounding away at her typewriter in a log house isolated in the middle of the boreal forest, remote from the privileged world of the Swedish gentry she had been born into and far from other scientists and scientific libraries. Far from anyone at all, yet for fifty years the top ornithologists on the continent beat a path to her door.

I met Louise de Kiriline Lawrence in 1980, just a few years before the golden bird landed on both our feeding trays. She was an imposing woman—tall, square-jawed, and high-cheeked with plain Scandinavian features, her hair clipped sensibly short though still elegant, her clothes finely made and artfully chosen. A handsome, no-nonsense woman with penetrating eyes. I was barely thirty, living in the bush with two young boys scarcely in school. I had just written my first book; she had just published her last, although neither of us knew that then. I had brought my copy of To Whom the Wilderness Speaks to her signing at the library in North Bay. I arrived late, hoping the crowd would have thinned, but the room was still jammed with people pressing to be close to Louise. I held out the book and she briskly asked my name, as she’d asked almost a hundred others before me, then she signed her name with a flourish, and flashing me a smile, said, “Tack så mycket!” as I melted silently back into the crowd.

We met occasionally after that. The few times we were together, we talked birds and writing and how the north woods inspired us and at the same time, threw up its obstacles. In 1989, when she was 95 and I was 40, I wrote a profile of her for Harrowsmith magazine. But the idea of this woman, alone in the woods, watching, continued to captivate me. What drove her particular brand of curiosity? What fueled her passion for birds, a devotion that never faltered for half a century? What in her background or her character or her situation conspired to shape this immigrant woman, isolated in a log cabin in the northern Ontario bush, into one of Canada’s first and finest amateur ornithologists and nature writers?

I ponder this today as I watch a gang of violet-crowned and broad-billed hummingbirds frantically licking up the nectar from the feeders outside my window in the mountains of central Mexico. Idly, I wonder what feeding schedule these birds are on. How much do they drink at each visit to the feeder? How often do they pause to check for interlopers and threats? If I were Louise, I would get out my stopwatch and my notebook to record the timing and length of each visit, each sideways glance. I’d set up a live trap and band the flitting birds to determine if one particular violet-crowned visited many times or if a shimmer of hummingbirds was feeding outside my window.

But I am not Louise. I lack the patience for scientific study. Besides, it is Louise not hummingbirds, I have in my sights. She is gone, but still I watch her—through her vast correspondence, her speeches, her books and articles, her drawings and photographs, the birds and nests she salvaged for museums, the neatly typed records sequestered in archives across the continent.

A life history is what I’m after—not of a species, of a watcher named Louise.