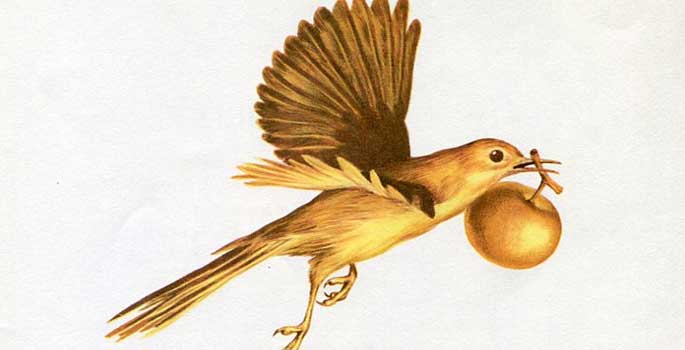 The March sun wasn’t yet warm enough to slump the snow when the Evening Grosbeaks descended on Louise’s feeding station. She was watching out her kitchen window, as she always did, a cup of strong coffee in hand, her reward after her vigorous bird walk at dawn, a habit of forty years that she had not yet given up, even on the cusp of ninety.

The flock of black and yellow birds that mobbed her tray of sunflower seeds was larger than she had seen in years, hordes of them. For decades, she’d been collecting data on the Evening Grosbeak for her ornithologist friend Doris—how many came to her feeder, male or female, when and where they nested, how long the eggs took to hatch and the young to fledge. She made a mental note to check her records to see if the numbers this spring were truly record-breaking or just an impression sparked by the thrill of such an influx of birds massing in her forest.

Suddenly, amidst the black and yellow throng, a flash of pure gold—a bird the same size and shape as an Evening Grosbeak, but solidly yellow, like an oversize canary. Louise grabbed her binoculars and trained them on the golden bird clinging to the edge of the tray.

My feeder was half an hour southwest of Louise’s, flying as a hungry bird might along the canopy-highway of forest between her log house nestled in the pines on the edge of Pimisi Bay and my R2000 prefab, tucked into a swath of Crown Land just south of Callander in Ontario’s Near North.

Evening grosbeaks shifted across the wooden feeder tray as if by some prearranged schedule, clearly not women and children first as it was the males that were snuffling up the sunflower seeds, cracking them open and scooping out the meat with their thick, curling tongues, blackening the snow with shells.

The motorcycle gang, I called these birds, gold stripes above their eyes like cool yellow sunglasses, their wings glossy as black leather jackets with a startling white blaze. My sons were at school; my husband at work. I stood alone at the sliding-glass doors, counting. A hundred birds, at least.

Silvery females were jostling for seed now. Suddenly they fluttered up, a small explosion, leaving a strange, golden bird alone on the tray.

I lifted my binoculars. Obviously a grosbeak: that thick seed-cracking beak; the same distinctive wing and forehead markings, but not black, just a faint brush of sterling. The other birds settled back to their feeding, edging the uncanny bird off the tray every time it tried to snatch a seed, until finally, the gilded bird rose like wisp of pure sunshine and disappeared among the trees.

From Chapter One,
Woman, Watching