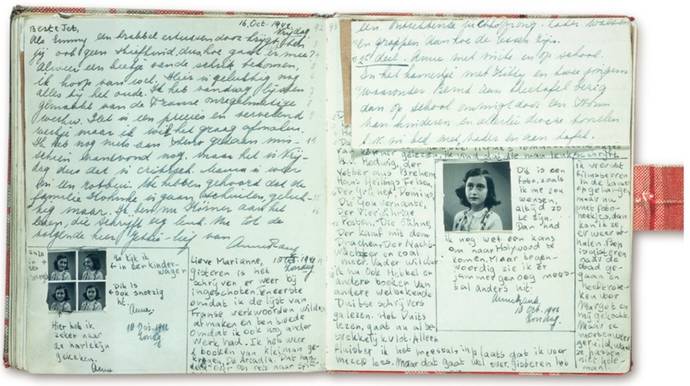 Paper is not forever: it can be burned, cut, torn, crumpled, lost; it can rot, discolour, disintegrate; be eaten away by mice and mould. Even so, it is more enduring than what we think or what we say. It has the strength to carry words across vast landscapes and through millennia, from one person to hundreds, thousands, even millions.

The Flight of Birds throughout the Air 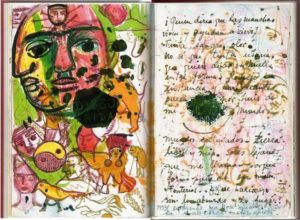 In 1815, John Adams, the second president of the United States, wrote to his grandsons as they were preparing to cross the Atlantic to join their parents: “Without a minute Diary, your Travels will be no better than the flight of Birds throughout the Air. What you write, preserve. I have burned Bushells of my Silly notes, in fits of Impatience and humiliation, which I would now give anything to recover.”

I received my first diary as a going-away gift when I was seven, on my way to Brazil with my family. I wrote in it daily until I was a young woman and I’ve kept one sporadically ever since. I’ve never thrown them away or burned them, but neither have I been a consistent recorder of time’s passage. When I visited Frida Kahlo’s Casa Azul in Coyoacán, I was filled with guilt and longing at the sight of her rows of boxed diaries, bulging with clippings and sketches and her impressions, what seemed like every moment of her life.

Leonardo da Vinci, one of the world’s great diarists, left 13,000 pages of notes containing his observations, speculations, plans, and fantasies. The printing press was brand new when he was born in 1452, and paper had just arrived in Italy 200 years before. 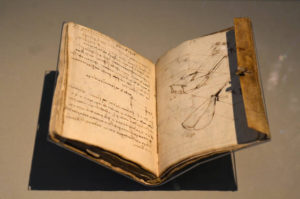 What if there had been no paper? Would he have scratched his ideas in the sand? Painted them on a wall? He could have used parchment or vellum, but the skins of animals were expensive and relatively scarce, the purview of scribing monks. The supply of paper must have been limited, too, yet Leonardo didn’t stint. Of his finished works, only some fifteen paintings and a few sculptures survive: his reputation rests mostly on the enormous body of sketches and notes for his precocious inventions, all recorded for the future on paper in his mirrored script, the movement of his hand visible in the ink on the page.

Villa of the Papyrus Scrolls

Almost two thousand years ago, the eruption of Etna buried not only Pompeii, but the town of Herculaneum and a nearby mountainside villa belonging to Julius Caesar’s father-in-law.

In 1752, the villa was excavated from within its ninety foot-foot tomb of stone and ash. Among its splendidly intact loggias and galleries was the only private library that survives from antiquity: a small room housing hundreds of papyrus scrolls stacked horizontally on shelves: 800 books in all, which some believe represent only the anteroom to the main library of what has come to be called the Villa die Papyri—the Villa of the Papyrus Scrolls. 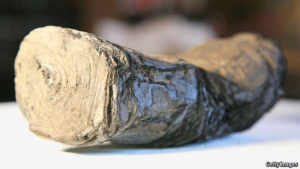 Ironically, the ash that charred, then interred the papyrus also preserved this first paper. But in a twist that sounds like a fairy-tale curse, the second the scrolls are exposed to air, they start to deteriorate and disappear.

In the 265 years since their discovery, various means have been used to try to soften the scrolls enough to unfurl them: rose water, mercury, papyrus juice, and, most recently, a cocktail of glycerin, ethanol, and warm water. Nothing worked.

News from an Ancient Empire: “Would Fall”

Finally, last year, the Smithsonian reported that a Stanford physicist got permission to put one of the Herculaneum scrolls—a gift to Napoleon and now housed in France—through a synchrotron, a kind of accelerator that can be “tuned” to look for certain particles. Like magic, the iron-gall ink on the ancient papyrus became visible. Without physically touching the charred remains, a French team found writing scattered across the unscrolled papyrus and thus far has managed to make out one chilling phrase—“would fall.”

Digital technology, accused of killing the paper book, may yet succeed in saving a whole library.

We say we “keep a diary.” More to the point, a diary—like a book, like a scroll—keeps us on its crumbling, rotting paper pages. Such a fragile substance to carry so heavy a burden: news of a life, a place, of time itself.

Question:
What writing, preserved from the past on paper, has made an impact on you?

Posted by
Merilyn Simonds
Merilyn Simonds is the internationally published author of 18 books, including The Holding, a New York Times Book Review Editors' Choice, and the Canadian classic nonfiction novel, The Convict Lover, a finalist for the Governor General's Award. Her most recent nonfiction is Gutenberg’s Fingerprint: Paper, Pixels, and the Lasting Impression of Books. Her latest novel Refuge was published in 2018. Woman, Watching: Louise de Kiriliine Lawrence and the Songbirds of Pimisi Bay will be published by ECW Press in April 2022.
Merilyn Simonds has posted 51 articles
Previous articleBooks: Better Than Beethoven or a Cup of Tea
Next article How to Disappear/Save a Book