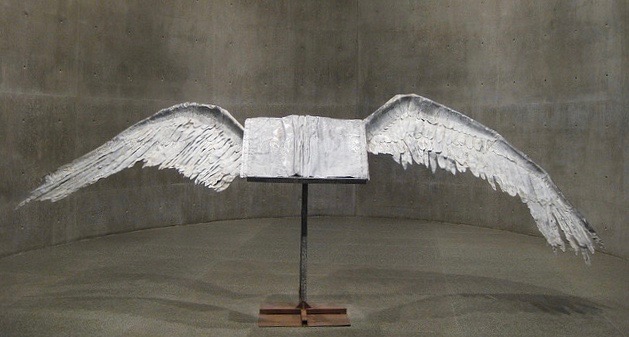 The Afterlife of Books

Jonathan Swift imagined a battle of books in the night, volumes hurling themselves off the shelves to tear each other’s pages out. But what really happens when the lights are dimmed, when readers go home, when a library falls into disuse or is abandoned to human disaster?

The Library at Night

Robert Lepage, Canada’s theatrical genius, was inspired by Alberto Manguel’s The Library at Night to create a virtual-reality nocturnal visit to the world’s great libraries. The installation, developed to celebrate the 10th anniversary of Montreal’s Grande Bibliothèque, opened in Montreal in 2015, closed in Quebec City this month, and is moving to the Francois-Mitterand Library in Paris for the summer. 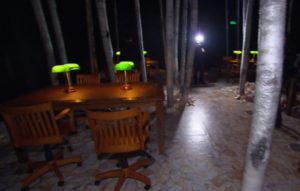 Imagine walking through a dark forest of looming birches, the ground underfoot adrift in leaves—the leaves of books. You sit at a small library table, under the wan light of a green-glass lamp, pull on a set of heavy glasses, look up into the starry sky, and suddenly you are in the library at Alexandria, where clerks are shelving papyrus rolls, flames licking at their feet. Or you’re in the Nautilus, in Jules Verne’s imaginary library, twenty thousand leagues under the sea.

To enter this virtual reality, you first walk through a recreation of the private library Manguel—one of the world’s great bibliophiles—housed in a 15th-century barn in the Loire.

“Like memory, a library works differently at night,” writes Manguel, who often sits in his library in the wee hours. “By day, each book seems to offer itself to the gaze equitably and democratically. But at night, certain books disappear while others assert themselves in the halo of your light.”

Lepage calls holdings such as the Copenhagen Library, where books can be seen but not borrowed, ‘dead libraries.’ When we no longer need physical books, he says, “We think, oh, libraries will just go away.” 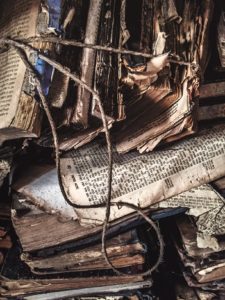 In 1942, a small Jewish village in Slovakia was abandoned as its citizens fled the Second World War or were hauled away to concentration camps. The local school remained locked until ten years ago when Yuri Dojc, a Canadian photographer, opened the door with his documentary film team and recorded the books decaying on dusty shelves, silent survivors of a brutal history.

The film and Dojc’s photographs, which are at the Art Gallery of Hamilton until mid May, are not just a memorial to the bindings of paper we call books.

In Dojc’s portraits, the stories can be felt and the human history, too: the hands that once opened these pages, the fingers that traced the words.

The Alchemy of Books 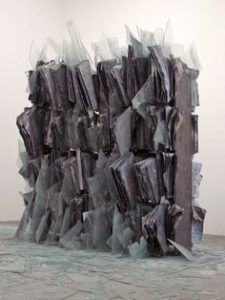 Forty of his “artist’s books” will soon be on display at Gagosian’s 21st Street gallery and this week Kiefer makes a rare public appearance at the New York Public Library to talk about them.

“What interests me is the transformation, not the monument. I don’t construct ruins, but I feel ruins are moments when things show themselves. A ruin is not a catastrophe. It is the moment when things can start again.”

It is impossible to imagine what future technologies will keep our print and digital books alive and readable. 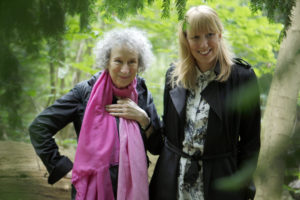 Katie Paterson, a Scottish installation artist, has begun a Future Library Project that demonstrates extraordinary—some might say foolhardy—faith in the survival of the book. Every year for the next hundred years, a writer will be invited to prepare a manuscript that will be sealed, as both printed text and on a thumb drive, in a special room in the new Deichman Library in Oslo. Margaret Atwood was the first in 2014, followed by David Mitchell and the Icelandic writer Sjón.

As part of the project, a forest of one thousand trees was planted; a century from now, the trees will be pulped to produce the paper to print an anthology of the one hundred sealed texts. Perhaps by then printed books will have gone the way of the scroll. Just in case, Katie Paterson has added a printing press to the vault.

“It’s very optimistic to do a project that believes there will be people in a hundred years, that those people will still be reading, that they will be interested in opening all of these boxes and seeing what’s inside them, and that we will be able to communicate across time, which is what any book is—a communication across space and time,” Atwood mused for a video camera as she leaned against a tree near the newly planted forest.

“Future Library is hopeful in its essence, because it believes there’s going to be a reader in the future,” says Katie. To which Atwood smiles her characteristic wry smile. “Nature doesn’t really care whether there are human beings or not.”

Or books, for that matter.

But if there are humans, my bet is that there will be something to read. Technologies come and go, but if history is anything to go by, the human craving for story is eternal.

Do you have a personal library? What will happen to it when you are gone? Do all the libraries of your life still exist?

Posted by
Merilyn Simonds
Merilyn Simonds is the internationally published author of 18 books, including The Holding, a New York Times Book Review Editors' Choice, and the Canadian classic nonfiction novel, The Convict Lover, a finalist for the Governor General's Award. Her most recent nonfiction is Gutenberg’s Fingerprint: Paper, Pixels, and the Lasting Impression of Books. Her latest novel Refuge was published in 2018. Woman, Watching: Louise de Kiriliine Lawrence and the Songbirds of Pimisi Bay will be published by ECW Press in April 2022.
Merilyn Simonds has posted 51 articles
Previous articleThe Book Lover’s Arsenal
Next article The Word Made Flesh