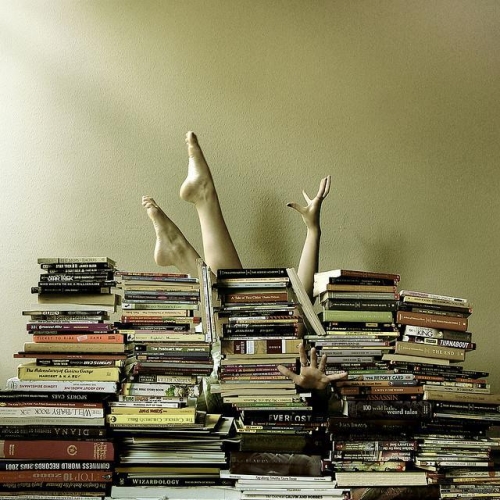 Don Vincente wanted just one thing: to own the sole surviving copy of Furs e ordinations, printed in 1482 by Lamberto Palmart, Spain’s first printer. Vincente ran a Barcelona bookshop stocked with books he’d plundered from ancient monasteries, including the one near Tarragona where he once lived as a monk. When the Furs finally came up for auction, he bid everything he had, but it wasn’t enough. The book went to his rival Paxtot, whose house mysteriously burst into flames a few nights later. The bookseller burned to death, but the precious Furs was discovered unharmed in Vincente’s shop. At the trial, Don Vincente’s lawyer produced a second copy of the rare book. “You see,” he argued convincingly, “the one in Vincente’s shop was not necessarily Paxtot’s.”

“Execute me now!” moaned Don Vincente. “My copy is not the only one!” 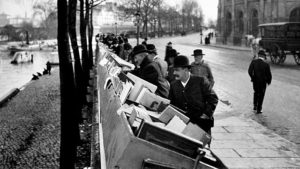 Don Vincente was a bouquiniste, a purveyor of rare and antiquarian books. The term was coined in 1734 in Paris, where bouquinistes still ply their trade along the banks of the Seine, making it (as the BBC once quipped) “the only river in the world that runs between two bookshelves.”

Gustav Flaubert wrote a fictional version of Don Vincente’s story in 1836, when he was 14 years old. Titled Bibliomanie, it describes the obsessive, likable bookseller Giacomo “his eye cast into the immense galleries where the view was lost in books! He raised his head? Books! He lowered it? Books! To the right, to the left, still more books!” When Giacomo desired a book, he “devoured it with his eyes … loved it as a miser does his treasure, a father his daughter, a king his crown.” 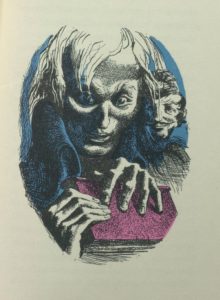 Bibliomania is defined, rather mildly, as a “passionate enthusiasm for collecting and possessing books.” But for a time, bibliomania was a much-feared malady, especially among scholars and wealthy collectors.

In 1809, Reverend Thomas Frognell Dibdin, an English book lover and sufferer, published Bibliomania; or Book Madness, a series of satiric dialogues based on his conversations with fellow crazed collectors.

The truth is even stranger than Dibdin’s fiction. Richard Heber, an English book collector of the time, had eight houses stacked with more than 146,000 rare books. Sir Thomas Phillipps vowed to collect a sample of every vellum manuscript in existence, a book habit that cost him the family fortune. His house was described as a “dilapidated swamp of books … every room is filled with heaps of paper, books, charters, packages … lying in heaps under your feet, piled upon tables, beds, chairs, ladders.”

Bibliomania is often construed as a 19th century made-up malady, like bicycle face, wandering womb, and the vapours. But as recently as 1943, Dr. Martin Sander described the onset of bibliomania in the Journal of Criminal Law and Criminology:

“the friendly, warming flame of a hobby becomes a devastating, ravaging wildfire, a tempest of loosened and vehement passions. We are then in the presence of a pathological, irresistible mental compulsion, which has produced more than one crime interesting enough to be remembered.”

Among the most recent is the theft in 1990 of more than five million dollars’ worth of rare books—over 23,600 titles, including a first edition copy of Harriet Beecher Stowe’s Uncle Tom’s Cabin. Stephen Blumberg of Ottumwa, Iowa, was convicted of the crime. Dubbed the Book Bandit, he served four and a half years in prison and on his release immediately returned to collecting and stealing books.

Technically, Blumberg suffered from bibliokleptomania, the stealing of books. Others suffer from bibliophagy, the eating of books, and bibliotaphy, the burying of books, such a common and complex practice it deserves a blog of its own.

None of these terms, including bibliomania, appear in the Diagnostic and Statistical Manual of Mental Disorders, which doesn’t consider compulsive hoarding a serious psychological disorder. According to Dr. Peter Subkowski in the International Journal of Psychoanalysis, these behaviors are subsets of the urge to collect, a ubiquitous phenomenon with anthropological, sociobiological roots.

Although bibliophagy usually refers to the voracious reading of books, some people, mostly children, actually eat books. Maurice Sendak, for instance, recalls cutting his teeth, literally, on The Prince and the Pauper. 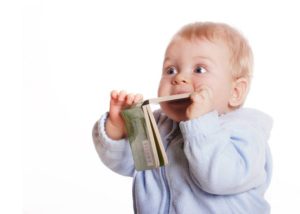 “A young child’s attitude toward a book is not unlike that of a cannibal toward a missionary,” wrote A. S. W. Rosenbach, a noted book collector who cited bibliophagy as one reason that so few first editions of early children’s classics survive.

In 2002, an innovative publisher released a children’s book with vanilla-flavored potato-starch pages and food-colouring ink, targeted specifically at small bibliophages.

In the 17th century, however, bibliophagy was more torture than treat. The Danish author of a denunciation of Sweden saved himself from the guillotine by eating his book boiled in soup. The Duke of Saxony forced the satirist Isaac Volmar to physically eat his words. And the German jurist Philip Oldenburger was whipped mercilessly until he swallowed every page of his offending pamphlet.

I glance nervously at the stacks of books by my bed. Summer reading, I call it. For the past weeks my inbox has been deluged with recommended lists. Reading is on the rise, say Toronto librarians, and summer is the high season for indulging our passion.

Do we teeter on the edge of book madness?

Dibdin described bibliomania as ultimately fatal. However, he assures his readers that the Book Plague has “almost uniformly confined its attacks to the male sex, and among these, to the people in the higher and middling classes of society, while the artificer, labourer, and peasant have escaped wholly uninjured.”

Dr. Subkowski, too, notes that collecting behaviours are far more common in men than women. My own experience confirms this: my darling husband suffers more than I do when forced to leave a bookseller’s empty-handed. He often reminds me, with longing, that in his student days he was a book-picker for a bouquiniste.

How many books does it take to make a bibliomaniac? Emily Temple, in a recent LitHub story, claims that owning 1,000 books qualifies as a book hoarder. That figure seems low. We only have 7,000 books—more than Hannah Arendt or Harry Houdini, but fewer than our friend Alberto Manguel, who has 30,000, and way fewer than fashion designer Karl Lagerfeld, who has collected 300,000.

Bibliomania is a visible addiction, but it no longer has to be. A house need not be a “swamp of books.” Shelves need not groan under a tumble of tomes. I admit it: as well as that teetering stack by my bed, I have dozens of titles queued up in my ereader, where I can nourish my literary lust, huddle with my hoard of books secretly stuffed inside a flat, plastic screen, where I gorge on them to my heart’s content, a summer bibliobulimic.

‘Fess up: how many books do you have?

Posted by
Merilyn Simonds
Merilyn Simonds is the internationally published author of 18 books, including The Holding, a New York Times Book Review Editors' Choice, and the Canadian classic nonfiction novel, The Convict Lover, a finalist for the Governor General's Award. Her most recent nonfiction is Gutenberg’s Fingerprint: Paper, Pixels, and the Lasting Impression of Books. Her latest novel Refuge was published in 2018. Woman, Watching: Louise de Kiriliine Lawrence and the Songbirds of Pimisi Bay will be published by ECW Press in April 2022.
Merilyn Simonds has posted 51 articles
Previous articleMark Our Words
Next article A Monument of Books