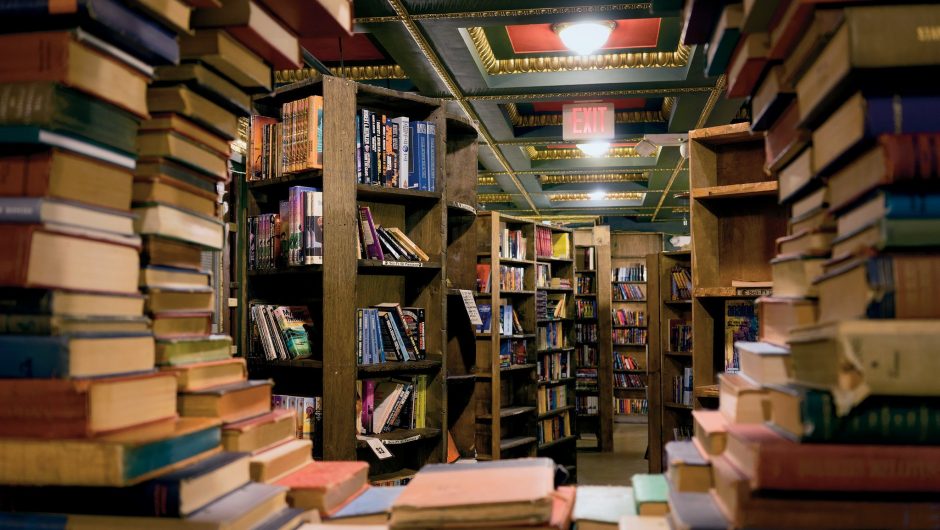 In the Café Gluck on the outskirts of Vienna, in the fading years of the Empire, Jakob Mendel sits surrounded by heaps of catalogues and books. An itinerant bibliophile denied a license for permanent trade, he sets up at a table when the café opens and stays until closing, his portable bookshop a secret except to the initiated. Even so, his book table is a mecca for booklovers and collectors, for Mendel is blessed with the magic of perfect memory and knows the contents of every book he sells — a mind stuffed fuller more than any expert, any librarian, any corporate whiz.

In “Mendel the Bibliophile,” a masterful and surprisingly contemporary story published in 1929, Stefan Zweig not only draws an iconic portrait of the bookseller but captures the essence of the perfect bookshop—part shrine, part life-giving fountain of knowledge, part communal gathering-place. 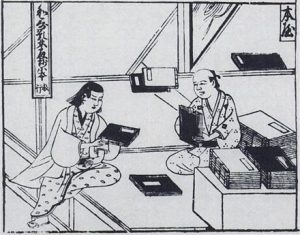 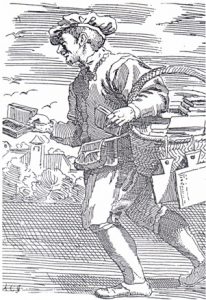 In 4th century BCE Athens, it was the rise of libraries that created procurers devoted to buying up books and selling them to public and private hoarders. In Rome, where the personal library became an indispensable part of domestic architecture, booksellers listed books for sale on the door posts of their shops— their taberna librarii.

Scribes in medieval Europe were granted legal ownership of the material they copied and thus supplied copies of books on demand. Similarly, the first printers after Gutenberg became booksellers. For those who lived in outlying regions, books were sold much as Mendel conducted business: booksellers were pedlars, offering missals and chapbooks along with egg beaters and cures for rheumatism. It wasn’t until the 19th century that a clear distinction was made between publisher (the producer of books) and bookseller (literary promoter and seller of books).

A Place for Books 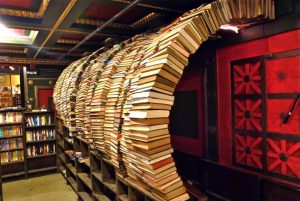 “The way a specific story relates to the whole of literature is similar to the way a single bookshop relates to every other bookshop that exists, has existed and will perhaps ever exist,” writes Jorge Carrión in Bookshops, A Reader’s History, which opens with “Mendel the Bibliophile.”

Bookshops—bookstores to North Americans but bookshops to the rest of the English-speaking world—sell books, but what makes them so dear to the hearts of book lovers?

Is it because books themselves are beautiful? Bring them together in beautiful spaces, and the result is inspirational. The Polare bookstore in Maastricht is housed in a 13th century converted Dominican church. The books in El Ateneo in Buenos Aires are stacked where plush seats once graced the Teatro Gran Splendid. The Librairie Avant-Gard in Nanjing, named China’s most beautiful bookshop, is housed inside a government car park that was once a bomb shelter.

But a bookstore is more than bricks and mortar, however beautiful. And it isn’t just the fact that books are sold here that makes bookstores such a beacon. 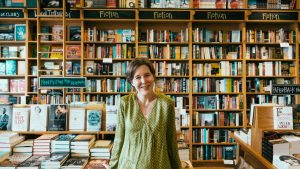 As novelist Ann Patchett confessed before she opened Parnassus Books in Nashville, Tennessee in 2011, “I wanted to go into retail about as much as I wanted to go into the Army.” What she did want was to re-create “the bookish happiness of my childhood.” She’d grown up in Mills bookstore, a 700-square-foot shop  where “the people who worked there remembered who you were and what you read, even if you were ten.” Patchett wanted that kind of bookstore— “one that valued books and readers above muffins and adorable plastic watering cans, a store that recognized it could not possibly stock every single book that every single person might be looking for, and so stocked the books the staff had read and liked and could recommend.” 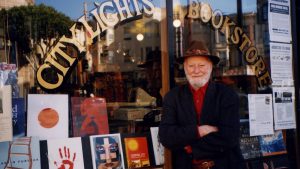 Bookselling is the end of the publishing process, and Ann Patchett isn’t the only writer who has closed the loop between a writer and her readers. In the United States, novelist Emma Straub recently opened Books Are Magic in Brooklyn. Judy Blume owns Books & Books in Key West. Louise Erdrich sells books and Native American art in Birchbark Books in Minneapolis. The most famous American bookstore owned by a writer is probably City Lights in San Francisco, the brainchild of poet Lawrence Ferlinghetti. 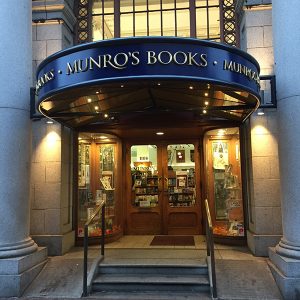 Canada has its own writer-bookseller tradition. In 1963 Jim and Alice Munro—that Alice Munro—opened Munro’s Books in Victoria, BC. Pages on Kensington in Calgary, Alberta, was started by novelist Peter Oliva in 1994. The poet Alice Burdick and children’s author Jo Treggiari are co-owners of Lexicon Books, in Lunenburg, Nova Scotia. Last year, novelist Michelle Berry started Hunter Street Books in Peterborough, a university town without an independent bookstore, and this year, Sheree Fitch set up a seasonal bookshop in her granary: Mabel Murple’s Books Shoppe and Dreamery.

Fitch started her shop in response to the threatened closing of the local elementary school. “How can I live here, become part of this community, and turn my back on this?” she said.

Likewise, Michelle Berry’s shop fills a hole left when the only independent bookstore in Peterborough closed in 2012. As one local author put it, “The local lit community was a gang without a clubhouse.” 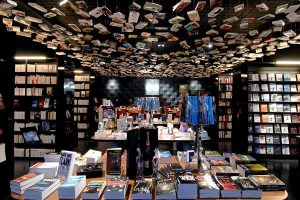 Like Zweig’s Mendel, the bookseller makes the book shop—and turns a business into a “local.” Perhaps writers make good booksellers because they know books. They read widely. And the imprint of their taste can be seen on the shelves—qualities shared by all the best bookmen and women.

It is hard to parse the precise alchemy by which a bookseller turns a retail business into a vital community hub. Some stores are encyclopedic in 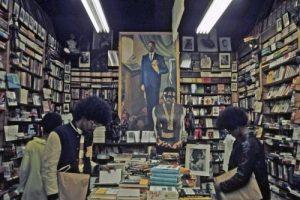 their range of books; others mine a narrow band of literary ore, specializing in psychology, African-American literature, GBLTQ2 books, women’s issues. Some stores set out comfy chairs, an unspoken invitation to sit and contemplate in the company of words. Others offer readings and launches, space where book clubs can meet, workshops convene. In the 1950s and 60s, the National Memorial African Bookstore, nicknamed the “House of Common Sense and the Home of Proper Propaganda,” became the reading room for the American Civil Rights Movement. 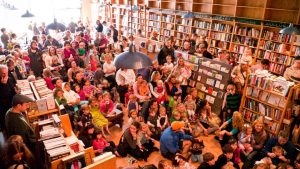 Print-on-Demand may mimic the one-copy-at-a-time bookselling of medieval scribes. Internet booksellers may offer millions of titles at once. Chain bookstores, like 18th-century pedlars, may salt their books with kitchen implements and candles. But it is the independent bookshops that draw us like Mendel’s table in Café Gluck—shops where the shelves reflect the taste of their owners; where the person at the till asks whether your aunt liked that Norwegian mystery you bought her last Christmas; where the staff know exactly the book you mean even though you can’t remember either the title or the author, only that it took place in England and had something to do with a giant, a literary book, but a fantasy, too, sort of; a place where, when you need a serenity break, you can just wander through.

All bookstores sell books, but the best of them are places where writers and readers converge — a local salon where great ideas are exchanged, where conversations are sparked and carried on over months and years, where cultures are spawned and nourished.

“You create books,” concludes the narrator of Zwieg’s story, “to forge links with others even after your own death, thus defending yourself against the inexorable adversary of all life—transience and oblivion.”

And you visit bookshops, I would add, to feel that undying, steadying pulse.

What is your Best Little Bookshop Ever?

Posted by
Merilyn Simonds
Merilyn Simonds is the internationally published author of 18 books, including The Holding, a New York Times Book Review Editors' Choice, and the Canadian classic nonfiction novel, The Convict Lover, a finalist for the Governor General's Award. Her most recent nonfiction is Gutenberg’s Fingerprint: Paper, Pixels, and the Lasting Impression of Books. Her latest novel Refuge was published in 2018. Woman, Watching: Louise de Kiriliine Lawrence and the Songbirds of Pimisi Bay will be published by ECW Press in April 2022.
Merilyn Simonds has posted 51 articles
Previous articleWinter LitBits 2017
Next article The Unexpected Nature of Collaboration