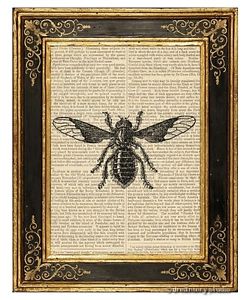 Colmán of Elo was tired. Tired of reading and tired of the fly that buzzed across his vellum page.

“Sit!” he commanded the fly. The fly turned its mosaic eyes upon the blessed saint who wrote Airgitir Crábaid, now the earliest example of Old Irish Prose.

“Sit there!” commanded Colmán, pointing to the last word he’d read. And so the fly sat, patiently waiting until the saint returned to his reading in the Abbey of Muckamore.

Where we left off

This origin story of the bookmark is undoubtedly apocryphal, but when, exactly, did bookmarks become our companion to books?

The word itself is a youngster, coined in 1840. For a decade or two before that, the device was known as a bookmarker or pagemarker or sometimes just a marker. But what about readers five hundred, a thousand, two thousand years ago? Did they devour books in one sitting, for fear of losing their place?

Of Butterflies and Dogs’ Ears

Without a bookmark, a reader has few choices. Butterfly the book, leaving it smashed on its face like a drunk in the sun. Pinch a page corner and snap it over in a dog’s ear. Stab a pencil point in the margin. All too aggressive, surely, for the gentle pastime of reading. Such injury is grievous and permanent, that broken spine, that scar at the corner a lasting reproach.

Almost as soon as the book was invented in the first century, readers looked for a way to remind themselves where they stopped reading. Books then were rare and hand copied: the place-marker must not mar the page. 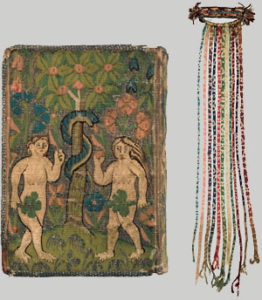 The oldest surviving bookmarker is from the 6th century, a strip of ornamented leather attached by a strap to the cover of the book. It was discovered under the ruins of the monastery of Apa Jeremiah, near Sakkara Egypt.

This is the ancestor of those lovely ribbons that dangle from the spines of high-quality hardcover books, draping up or down between the pages. If only every book was so beribboned! 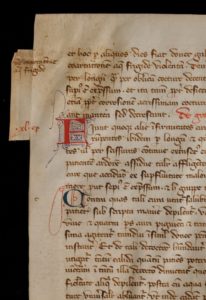 Between the 13th and 15th centuries, a different approach prevailed: a thin strip of parchment glued to the fore-edge of the page or threaded through a tiny slit n the margin parallel to where the reader stopped.

Fore-edge markers look a bit like an index tab. Sometimes the tab was made by tearing a piece off the page itself, sometimes a permanent tab was glued to the parchment, and sometimes, a reader would laboriously trim the margin to create a tiny tab marker. 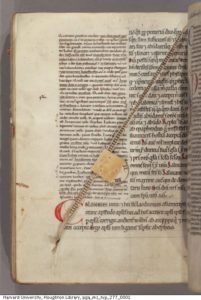 At some point, though, the bookmark was divorced from the book and became a freestanding companion that could be used in book after book: cords and ribbons and embroidered, tatted bits that hung down between pages, anchored by a gob of metal or bead that rested on the top edge of the book. Occasionally, triangles that slid over the page corner.

The most ingenious was a little rotating disc made of parchment or light metal that was attached to the book by a string so that it could slide top to bottom. The disc was inscribed with Roman numerals I to IV. When a reader wanted to mark their place, they slid the disk down to the proper level and turned it to indicate the column where they stopped reading: first and second columns on the left, third and fourth on the right.

Back then book buyers had to slit open their own pages, and it didn’t take long for entrepreneurs to market a combination bookmark-pagecutter so readers could slice as they read.

Bookmarks were issued as mementoes, and soon as advertising. An Austrian manufacturer of cigarette papers produced 1,000 bookmarks in the 1930s, featuring writers from around the world. A 1920s Dutch soap manufactory printed the back with 16 rules for the proper treatment of books:

16. Don’t insert other objects as bookmarks than real bookmarks into your books. 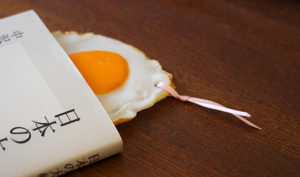 These Dutch bookmarks obviously didn’t make their way to Japan, where you can buy realistic fake-food bookmarks, saving your place with a rasher of bacon, a fried egg, a pancake or a slice of salmon.

Bookmarks are for Quitters

Even in the digital world, bookmarks denote a page, but not one made of paper. On my Kindle, a lovely image of a ribbon slides down to mark a page I want to go back to. On my computer, I save “bookmarks” of web pages I hope to revisit (and rarely do). 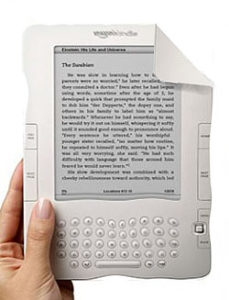 Oddly, digital bookmarks were conceived before www was born. In 1989, digital inventor Craig Cockburn drafted a proposal for a touch-screen device called “PageLink” that would function as both an ereader and a browser—with bookmarks. It was never developed but three years later the first bookmarks appeared as part of the first browser, Mosaic.

Bookmarks are a universal feature of browsers now, but readers must miss their dog-ears. In 2011, Kindle revealed plans for a DE (dog-eared) version with creased corners, giving the reader the impression that their ebook is well-thumbed. 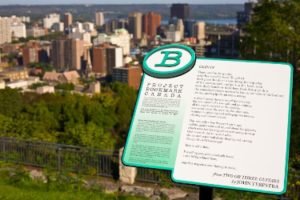 At the other end of the scale is Project Bookmark, the very solid bronze brainchild of Miranda Hill of Hamilton, Ontario. These lovely plaques mark imagined stories that take place in real landscapes, bookmarks that literally blaze a literary trail across Canada. 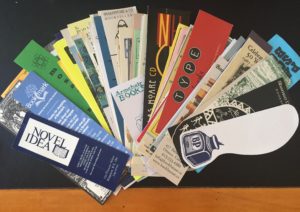 My husband collects bookmarks, the paper kind. Although he finds them at festivals, libraries, street fairs, and just about anywhere anybody has anything to sell, he only collects bookmarks from bookstores. He has almost a hundred fanned in a holder on his desk, reminders of books he’s bought and stores he’s browsed. Recently, I brought him a perfect gift from Charlottetown, PEI: a bookmark from a bookshop named Bookmark.

A friend of mine, a great reader and one-time editor, also collected bookmarks, but only those printed one side. As she read, she’d note on the blank side every grammatical error, misspelling, and infelicitous phrase before sending the bookmark off to the offending publisher.

I am not a collector at heart. I’m just as likely to use whatever comes to hand when I need to save my reading place: a safety pin, a tatted doily, a stick of chewing gum, a rubber band. 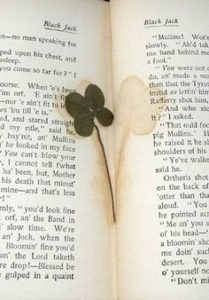 Like Colomán, I’m partial to living bookmarks. Every so often I come across a four-leaf clover, a pressed violet or daisy in a book that I read as a girl and it comes back to me, that feeling of lying in the grass, reading for hours, my fingers riffling through the greenery, transported to another world.

Erik Kwakkel, leader of the Turning Over a New Leaf project that explored the relationship between medieval book technology and cultural change describes what he came across in Zutphen’s chained library when he was thumbing through one of the first printed books from the 1460s.

“I had this astonishing encounter: a leaf put there by an ancient reader. It was hardened and felt like leather. A person 400 years or more ago picked up this leaf from the street on his way to the library. Was it fall? Was he looking forward to a long read in the dark library?”

Bookmarks can do that: mark not only the reader’s place but the reader, too, capturing a hint of character, a preference for broken spines or lucky leaves.

How do you mark your place in books?

Posted by
Merilyn Simonds
Merilyn Simonds is the internationally published author of 18 books, including The Holding, a New York Times Book Review Editors' Choice, and the Canadian classic nonfiction novel, The Convict Lover, a finalist for the Governor General's Award. Her most recent nonfiction is Gutenberg’s Fingerprint: Paper, Pixels, and the Lasting Impression of Books. Her latest novel Refuge was published in 2018. Woman, Watching: Louise de Kiriliine Lawrence and the Songbirds of Pimisi Bay will be published by ECW Press in April 2022.
Merilyn Simonds has posted 48 articles
Previous articleJune LitBits 2017
Next article Beware the Bouquiniste!