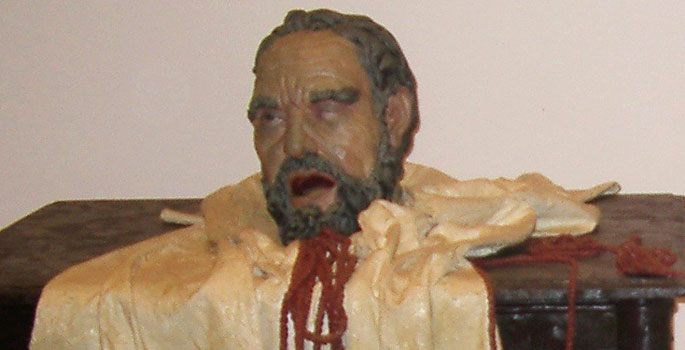 And she struck his neck twice with all her might, and severed his head from his body. Then she tumbled his body off the bed and pulled down the canopy from the posts; after a moment she went out, and gave Holofernes’ head to her maid, who placed it in her food bag.

O Lord God! Look upon the work of my hands!

The head rolled, coming to rest against a hillock of rumpled fabric, face upright among the folds. Even then, it was not still. Eyelids and lips contorted in irregular, rhythmic spasms until after five seconds, maybe six, the contractions ceased and the lids half-closed as if overcome by sleep, only the white of the conjunctiva visible.

Slowly the eyelids lifted, pupils tracking toward the sound. Through a ruddy mist, he saw her, heard her heaving breath, felt it hot across his brow. What have you done, woman? His voice to his own ears ripe with command, though his lips were fixed, a sluggish howl.

Holofernes! See the beauty of the countenance that has brought the enemy of my people low.

Again he strained against the weight of flesh that hooded his eyes, and there it was, his body at a distance, though he lunged his thighs toward her, grasped at the sword she held flush to her breast. All the world I have conquered, and this is how it ends?

Holofernes! Hear as I sing to my Lord with cymbals, sing to my God with tambourines, sing a new song.

Once more he raised his eyelids, fastened one faintly living eye on hers. Why do you linger then? Hoist this head upon your parapet. This whorl of flesh. Let ravens ream out these eyes, worms devour what gives shape to these bones, for I am immortal. My name will endure, as will yours, though not as a testament to your beauty or your cunning, your unnatural courage. From this moment, you live through me. So pick up my head, hold it high in your hands. We are one.

† In 1905, Dr. Beaurieux observed closely the head of a criminal immediately after decapitation by guillotine. Periodically, he called out the man’s name. The eyes opened and fixed on his, the gaze more penetrating each time, until at last, there was no response. “The whole thing,” Beaurieux wrote, “lasted twenty-five to thirty seconds.”

From Telling Stories, Secret Lives, a 2006 collaborative exhibition at the Agnes Etherington Art Centre in Kingston, Ontario, in which seven Kingston writers were paired with works from the permanent collection and asked to write a piece about or in response to the art work. I was paired with an installation piece by Ian Carr-Harris comprised of two tables, one with the illuminated text from the Book of Judith (above) and the other draped with damask on which lolled the sculpted severed head of Holophernes.